Rosa Maria Pegueros
I TEACH HISTORY; I LOVE OPERA! I teach Latin American history and Gender & Women's Studies at the University of Rhode Island. "OPERA LOVERS OF RI" is my opera events blog. I gather all of the opera-related events that are happening in RI and post them every Wednesday. If you have an event coming up, or hear of something small that you haven't seen advertised, send it to me: drpegueros@gmail.com and I'll post a link to it here. Tell your friends about this site. 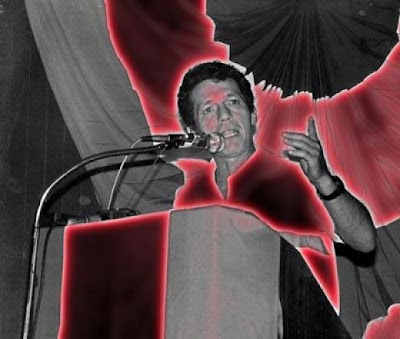 El Salvador’s Roberto D’Aubuisson (1944-1992) was uniquely malevolent. He would throw babies in the air and shoot them in midair, just for fun. The death squads of which he was the leader, hunted down and executed insurgents in the slowest, most exquisitely painful ways possible. The Spanish Inquisition could have learned a thing or two about torture from him: his favorite method involved a blow torch, earning him the nickname of “Blowtorch Bob.” I bet no one ever called him that to his face.

During the Salvadoran Civil War, 75,000 people were killed; 8000 were disappeared, and one million were left homeless, slaughtered by D’Aubuisson and his death squads. They killed a group of Jesuit priests, their housekeeper and her daughter; and a group of Catholic lay nuns who had just arrived in El Salvador. In El Mozote, they killed at least 794 townspeople: they separated the men from the women, locked them in a church, then took them out in small groups. After they raped the women, they murdered each one of them. Then they burned the bodies.

His crowning achievement was assassinating Archbishop Oscar Arnulfo Romero: On March 24, 1980, one of his gunmen shot him in the heart as he was saying Mass. Romero’s offense? Demanding the end to the killing of innocent men, women, and children in El Salvador’s Civil War. What an odd demand from a Catholic priest: love thy neighbor.

When throat cancer killed D’Aubuisson on February 20, 1992 , sending him, one hopes, to join Satan’s own favorite sons, Hitler, Stalin, Pol Pot and Chauchesku in the first circle of hell, I vowed I would remember and celebrate his date of death every year. So today, I remember by telling my students, my friends, and you, my readers, about the fiend of El Salvador, Roberto D’Aubuisson.

D’Aubuisson’s education at the School of the Americas is particularly galling. The SOA, chartered by the United States Congress, and sponsored by the United States Army at Fort Benning, Georgia, gained its fame by training Latin American military officers in methods of interrogation, torture, kidnapping and executions. These methods were described by former United States Representative Joseph Kennedy (D-MA) as “worthy of the Soviet gulag.” Our government allowed and encouraged this instructional program as part of a perverted foreign policy focused on maintaining stability in the region at any cost rather than in protecting the basic human rights of all of the citizens of the hemisphere.

Today, of course, the U.S. Army claims that it was mistaken when it published manuals on torture and related topics, but that admission has come only as a result of pressure from human rights groups to close the school. Despite years of civil disobedience, protests and intense lobbying, the SOA continues its nefarious work, nowadays touting a new name and a curriculum that includes a seminar on human rights: the Western Hemisphere Institute for Security Cooperation. The name may be new but we are not deceived: the leopard may have changed its spots but it is still as deadly as ever, turning out military officers who are the heirs to D’Aubuisson and his henchmen.

People never cease to amaze me. In an Alzheimer’s-like delusion of the past, the Salvadoran government dedicated a statue of D’Aubuisson and has a memorial Mass for him each year. One could argue that if anyone needs prayers for his eternal soul, he does but there is something ignominious about a tribute to a mass murderer who killed with such glee.

El Salvador also built a memorial to General Maximiliano Hernandez Martinez, its dictator from 1931 to 1944, who is best known for the massacre of 30,000 Salvadorans in 1932 in what is now called La Matanza, or massacre, which is the turning point of Salvadoran history. After that, the indigenous people of the country grew fearful of being seen as natives and their culture was virtually obliterated. Is it an indication of the continuing disenfranchisement of the peasants in El Salvador that these two monsters would be so honored?

A year after the memorial was dedicated, D’Aubuisson’s son and several other state officials were murdered in Guatemala on a diplomatic trip: the sins of the father visited once again on his son? A son who was carrying out the same regressive philosophies espoused by his father? Perhaps there is some justice after all.